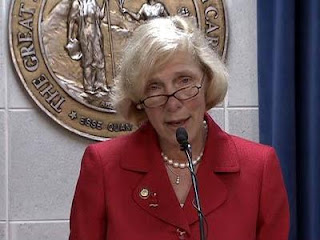 She was tired, caught up in a marathon legislative session, and hit the wrong button, but because hers was the deciding vote, Rep. Becky Carney, a five-term Democrat from Charlotte NC could not have a do-over. A fellow legislator said: “There was nothing she could do about it,” he said, in an interview. “There was nothing that can be done.”(Read More)

But, what was refreshing about the revelation of Ms. Carney’s blunder was her courage: "It was a huge mistake," Carney said afterward. "I take full responsibility."(Read More) (Emphasis added)

Laying aside the merit of what Ms. Carney’s mistake enabled, a measure that lifts the ban on hydraulic fracturing as a means for mining for natural gas, her trouble struck a cord. How often has fatigue or fear in the midst of my life’s little battles been the reason I hit the wrong button – saying, doing, or thinking the opposite of what I know to be right?

Whew . . . a bunch! More to the point, however, is the reminder – the best reasons in the world for doing wrong is never an excuse for not owning the blunder and making amends.

From the errors of others, a wise man corrects his own.
(Syrus – 1st century BC writer of maxims)

So much I can’t do-over – even as I knew the instant the words escaped my lips, or the actions hit my memory banks, I was out of bounds.  My hope is in God who accepts my confession and repentance and enables me to do the next thing – apologize and make restitution. (Psalm 51)

We never need to long for security, stability, or better outcomes in our life.  We can learn how these gifts are contained in our own actions. (Anonymous wisdom)

A Blast from my Past:
Yelling