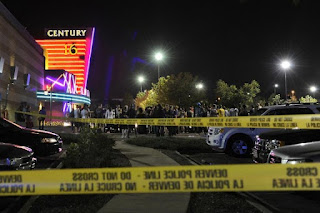 Letting more light in the living room last week was quickly eclipsed by the news of a horrific shooting, and terror plot in Aurora CO. This time last week how many folks were looking forward to an opening of a movie? By this week's end the nation got a glimpse into the outworking of someone’s child’s illness and sin nature.

More words have been written speculating why the shooter did what he did than have been written reporting the events that began at midnight last Thursday.  We want to know how and why something like this happened – we want to understand and prevent the darkness that spawned the terror that took 12 lives, injured many others and threatened first responders who may have broken down a door, igniting a firestorm.

But the darkness was not isolated in Colorado; in Texas, another group of people seeking a better life also violently died. (Fourteen Illegal Immigrants Killed) And in Chicago a young woman and her baby died, victims of an abortion. (Chicago Tribune story)

I believe death is the fruit of one man’s choice – Adam’s. (Romans5: 12) With that choice, the violence and horror often preceding death, is also death’s bitter fruit.  I believe, by God’s grace, we still have a choice – not to be shielded from violence and death, but to go through it and live. (1 Corinthians 15:22) I don’t like the conclusion that some people are so broken that their sinfulness spills out marring and destroying all it touches. But there it is.

Sudden, violent death is not what I think I am likely to face when I get up in the morning, go about my routines – it’s not what  any of the moviegoers expected; nor did the people who piled into that pick-up, speeding from Mexico to Texas anticipate it. Surely the young woman who was ending her unborn child’s life didn’t expect to forfeit her own that day, July 23.

But death is the elephant in the living room -- it's hard to talk about a "natural" death, much death that is unnatural and untimely.   Last Thursday, it bellowed so in Aurora that it got our collective attention.  Even the carnage in Syria took a back seat. We hardly heard its growl in Texas – and in Chicago – most of us missed its coming.

In the coming days, what will we see when we look in our lives’ mirror?