“When you give a lesson in meanness to a critter or a person, don't be surprised if they learn their lesson” Will Rogers

Context is a powerful interpreter of facts. Understanding the entirety of what a person said, when and where they said it and why  are crucial components of getting the facts straight – we need to listen and read as carefully as a good commentator  would speak and write. This week many reporters, politicians and other pundits blew it, and we saw a new low in journalism, politics and social commentary.

It started sinking with a charge and then a counter charge of  racism. For a brief moment, a news blogger, Andrew Breitbart, tried to show that the NAACP, which had charged others of racism, approved a black woman’s decision to withhold help from a white man. But the context of her admission showed something quite different. However, few people took the trouble to look behind the sound bite  Then, those who jumped in to condemn her were later embarrassed to discover that the out-of-context quote disregarded that she had given a powerful testimony of  racial reconciliation. 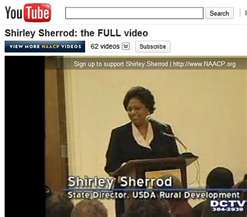 Shirley Sherrod, the U.S. Agriculture departments’ Director of Rural Development for Georgia, speaking before members of the NAACP, several months back, was urging its members in March of 2010 to consider advantages of job opportunities USDA programs for  rural development.

But first she gave her audience some background. She grew up in south Georgia, and saw a lynching and the perpetrators released on a technicality; she wanted out of the south! Then,  her father was murdered but his assailants were never charged; her family next lived through a cross-burning. But,  she vowed to stay in the south and work for change through the tumultuous decades of ending racial segregation. Had any of her accusers or repudiators  listened to just one minute on either end of “gotcha” words, they would have heard a story much different and more convicting than the  sound bite.   Listen for yourself!

Ms Sherrod  ended her speech by paraphrasing a proverb: Life is a grindstone, but whether it grinds us down or polishes us up is up to us.

Words are also like a grindstone – tearing down or building up. Words have meanings, expressing ideas that have consequences. In many of the reports of Ms. Sherrod’s speech, we saw consequences of words, taken out of context and used as weapons - offensively and defensively. And it was the context, the full story, of why Ms Sherrod  withheld her full help that should have engaged our full attention!

I hope Ms. Sherrod’s grinding experience will polish her, even as she has been bruised by other people’s rush to judge her.  More than that I hope we remember the power of words – especially when we decide to use them as millstones to grind  down those with whom we disagree. Words have power to build up or tear down, to curse or to bless.

At one time, flaming arrows were terror weapons, shot by enemies invading a fortress to kill wound and demoralize its defenders. Now we shoot sound bites. We who live with sound bites  should  pause instead of  speeding down information highways; we should  ask a few questions that many journalists, politicians and other pundits neglect or decline to ask. Until we develop this habit, we will never rightly understand each other or the world in which we live. We will remain more interested in fighting with each other than learning what is true
Posted by bwsmith at 1:46 AM No comments: 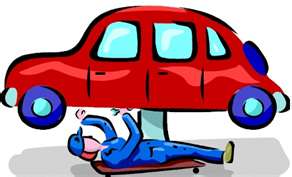 I thought I was getting the oil changed and the AC rejuvenated in our old Volvo. We had no idea how thorough the auto service company would be – and what a blessing it was to have repairmen go over our beloved buggy as carefully as they did. Apparently I was driving on a bit of borrowed time, so to speak: a decrepit battery, leaky oil gasket, improperly fitted replacement muffler, a dirty filter, worn rear brake pad, and trim work, among a long list, and this in addition to cruddy oil, and a wheezing AC.

Can we say major maintenance issues? But the bill was oh so reasonable for all the work they did, going above and beyond what we had thought we had needed.

I had no idea I had been driving with so many problems – any one of which might have been a bummer to contend with on a summer day in Dallas. But when I drove home, I felt the difference! I had been accustoming myself to the problems I thought it just came with the territory of driving a 1993 “Classic.” The glitches and maintenance problems had become the new normal for me.

All those parts that needed cleaning, tightening, fine tuning and  replacing had to be serviced if we want to avoid the expense of replacing a car.   Considering the possible scenarios, God’s finger prints were all over this one.  I totally underestimated what was required to keep an old car properly  serviced.

And I see a connection to keeping me running too. I need the Lord tinkering in my heart and mind – road-testing my performances as much as I ever needed a good mechanic to go over our car. I get way too accustomed to living with – rationalizing – bad attitudes, less than stellar speech, and weak performances.  God’s kindness to me is even more persistent than the kind mechanics’, and more skillful.

What a blessing to still be on the road, because of unexpected care!

None but two of my coffee mugs match.  I brought these two back from our most recent trip to Maryland. They were twenty-nine years old early  this May. Made in Japan, their shape is unusual and their pattern is  cheery but restrained, and singular;  I’ve never seen them anywhere, ever again.  Their  plump shape and  whimsical dollops of color  have impressed almost everyone who used them, too:  their weight, shape, and colors – they even hold the right amount of coffee.

So, now they are in Texas, matching mugs that match  none of our other ones. Could the potter who threw them, the painter who embellished them, ever have imagined how priceless their little creations would become? For, when I open my kitchen cabinet and see them, they match so many memories – priceless memories. They  remind me of so many treasures – and just how far God has led me. ( 2 Samuel 7:12)

When I experience the unique “joys” age brings or,  when I wrestle with what faith in Christ means, Dallas doesn’t have many hills that challenge me to consider the source of my help. Amidst so many clamoring voices that bring me the news of local, national and international disaster – not to mention church failures –  my funny little mugs remind me of the wide places into which God has led me; they recall the loving kindness of so many people, and His unfailing help, as the memories they evoke awaken. (Psalm 16:5, 113:9)


I lift up my eyes to the hills--
where does my help come from?
My help comes from the LORD,
the Maker of heaven and earth.

The LORD watches over you--
the LORD is your shade at your right hand;
the sun will not harm you by day,
nor the moon by night.

I watched “1776" today -- and saw the birth-pangs of the USA splendidly presented in music, dance, and clever dialogue. I never tire of the romance, the politics and passion that attended our nation’s start. Even as the musical celebrated what is best in our creation, it underscored the costly compromise slavery and high cost that many paid:  "Molasses to Rum" to slaves, and  "Momma, Look Sharp."

Two hundred thirty four years ago, in Philadelphia fifty-six men risked their lives and fortunes to sign a document that outlines a complaint against arrogant and willful governance , even as soldiers under the command of General George Washington had engaged the Redcoats in fierce battles.

What did that document spell out? It spelled out the rights of the people, those governed, to change a government that oppresses them. “. . . We hold these truths to be self-evident, that all men are created equal, that they are endowed by their Creator with certain unalienable Rights, that among these are Life, Liberty and the pursuit of Happiness. . .” It has been described as a statement of principles through which the US Constitution should be interpreted.

The men who signed the declaration, drafted by Thomas Jefferson and amended, believed independence from tyrannical power was worth the cost. What do we believe today?

The newest nominee for the United Supreme Court, Ms. Kagan , is not persuaded of the force of the rights spelled out so carefully in the Declaration of Independence. And now we learn that  one in four Americans doesn’t know from whom the United States declared its independence.  (Marist Poll July 02, 2010)

Why should that matter, hmmmm?
Posted by bwsmith at 12:23 AM No comments: