Both Bill Maher and Rush Limbaugh describe some constituencies as Low Information Voters; skewering people they think are poorly informed about many important issues.   Apparently, there really are voters who pigeonhole candidates and vote on assumptions such as candidates’ physical attractiveness, sex, race or how the names appeared on ballots.  And,

An analysis concerned with the "puzzling finding" that incumbent legislators in mature democracies charged with corruption are not commonly punished in elections found that less-informed voters were significantly more likely to vote for incumbents accused of corruption than were their better-informed counterparts, presumably because they did not know about the allegations. (Wiki on LIV’s)

I know I am guilty of having projected my aspirations for personal peace and affluence on candidates, some who could never nor, would ever deliver on all they promised.

If I could have been so uninformed about making political choices, how about other choices I’ve made? Like religion.

I am an American, and like 74% of my fellow citizens, I choose “Christian” as my religion. (The Pew Forum Reports) But what [all] Christians believe is not an easy pigeonhole into which to stuff us. If George Barna has accurately sampled us, we disagree on all kinds of things, especially on moral issues.  (Americans and Moral Concerns)  Perhaps this explains why a few prominent American Christians have changed their support for marriage as the union of a man and woman to the support of same sex-marriages?

Many American Christians of all stripes get the message Christ urged about compassion and social justice, and a commendable number practice the conviction that we must love our neighbors as ourselves.  What we might not get is practicing the first part of Christ’s summation of the Law: Love the Lord your God with all your heart, mind and strength. (Matthew 22:36-40)

And unhappily, some Christians who capture the world’s attention are, shall we say, “low-information” Christians. Either they promote God’s compassion, but play down His holiness, or, they wax eloquent on His Judgment, and forget to mention His merciful grace.  Both misuse the Scriptures – perhaps because they don’t read it. (What Americans Think About the Bible)
Low information Christians are unwittingly – or deliberately – denying others who would follow Christ a level path; they are refusing healing to those who need Christ’s help, and hope. (Hebrew 12:12)
So, if given a chance, we must explain that His love and mercy can’t be understood apart from His justice and His wrath.  The hard part about offering the love of God in Christ is that we must not withhold the truth -- the two-pronged truth that

·      God is holy.
·      Humans are broken and we need restoration to our right relationship to God and each other that only God gives – and – we can’t keep indulging the sinful conduct that separated us from Him. Or approve others who do.

Easter is a great opportunity to pass on the information:  remember the power that raised Christ from the dead, is freely available to any who want out of the dead-ends in which they find themselves.

Bless the Lord, O my soul; and all that is within me, Bless His holy name.
Bless the Lord, O my soul, and forget none of His benefits;
Who pardons all your iniquities; Who heals all your disease;
Who redeems your life from the pit;
Who crowns you with loving kindness and compassion;
Who satisfies your years with good things,
So that your youth is renewed like the eagle. (Psalm 103:1-5)

Energizing Our Easter Baskets
Posted by bwsmith at 4:43 PM No comments:

Email ThisBlogThis!Share to TwitterShare to FacebookShare to Pinterest
Labels: Micah 6:8

Here’s a link: Extra Terrestrial Abduction Day.  One of the simple pleasures I enjoy in Texas is a radio station that plays classical music and works hard for have DJ’s and programming that appeals to a wide audience. So, in addition to hearing and learning about music, I learn stuff I never knew. (Classical Music) 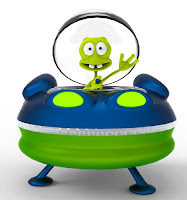 That oak tree across the street is getting dressed: it has a gold/green haze that popped out in what seemed like one day – the drey, or squirrel’s nest -- is less distinct against the morning sky. And in an email meditation, I read

When one tugs at a single thing in nature, he finds it attached to the rest of the world.
--- John Muir

I look out the window and see beauty I had no hand in creating – I am listening to music whose sounds delight and whose origin are another human’s gifts. Balance, order, and purpose in what I see and hear – until the news breaks through.  And I learn of troubles that are assailing people – troubles I didn’t cause, and can’t control or cure.  It seems like chaos. So, today’s electronic message counsels:

Even in the face of day-to-day uncertainties, we are reassured by the order and symmetry of the universe.  The unvarying cycles of nature --- the precise arrival of this season --- remind us of God's ability to bring harmony to all things. Through the orderly unfoldment of nature, we are shown once again that we can rely unreservedly on His wisdom and power, now and forever.

Nature is a splendid declaration of God’s handiwork – John Muir, though steeped in the Bible, preferred natural revelation to God’s word.  (Wiki on John Muir) When life gets crazy and mean, looking at nature does bring a sense of calm – but what about when people I love get weird. Or, when I get crazy and mean?

Staring at a tree only helps so far – and the pain of broken relationships or thoughts isn’t always lulled away with good music. Here’s where Scripture helps – it gets at why spring is so dazzling, but depression is such a reasonable response when we take a good look at the world around us – and within us. (See Psalm 19)

The God of my understanding is One who is faithful – especially in crazy, mean and dark times. Jeremiah described His unfailing provision in the midst of awful troubles – troubles Jeremiah did not cause and surely could not control. Jeremiah had a rough time telling Israel the truth about her coming troubles – nobody wanted to hear it – he wound up in more than one pit, from which the Lord delivered him. The prophet felt walled in, with no clear way of escape – and his prayers bounced off the ceiling. Being beamed up by an extra-terrestrial might have been a huge blessing!  But Jeremiah looked to the unseen hand of God and remembered the mystery of God’s wrath and His mercy. (Lamentations 3)

Some might hope that they will never meet Jeremiah’s God; I hope I will.

. . . Change and decay in all around I see;
O Thou who changest not, abide with me. (Abide with Me, by Henry Lyttle)
Posted by bwsmith at 10:00 AM No comments:

Email ThisBlogThis!Share to TwitterShare to FacebookShare to Pinterest
Labels: being alive, faith in Christ, fear 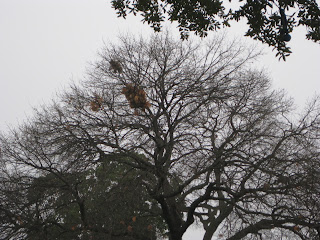 For years, I thought of squirrel’s nest as a euphemism for a messy, disorganized room, sloppy thinking or an untidy hair-do. But no, some squirrels built their homes high up and stuff them with twigs, leaves, pine needles, or grass, and line them with shredded grasses, fresh leaves, moss, and lichens are used to line the inside of the nest. I never saw one until recently – when I looked up from my desk, and saw the oak tree across the street silhouetted against a winters’ sunny sky.

The tree across the street now is completely bare – and I can clearly see a squirrel’s nest or two. They look precarious – too large for the supporting branches – and it seems as if they could crash to the ground with the slightest provocation. We’ve had several days of extra breezy weather – enough so as I wonder how that drey stays put, and I wonder if there are little critters inside it, how they are managing.   For now, I can see plainly, what will be hidden in the coming weeks as green haze deepens into an enormous verdant canopy.

Some days I feel like those squirrels’ nests look – precariously resting on limbs that may not support me – and completely exposed.

Perhaps this is a gentle reminder to keep editing how much I hang out in cyberspace. My sister-in-law’s gentle observation of the various flowerpots dotting our garden’s perimeter has become a mantra: you need to edit the pots.  Too much of even a good thing is still too much.

Or, these precarious feelings may bubble forth from all the joys of maturity continuing as they present themselves: stumbling, bumping into things and sometimes falling can really wreck a girl’s confidence; losing words; forgetting names. Too many examples are still too much.

·      In a [woman's] middle years there is scarcely a part of the body [she] would hesitate to turn over to the proper authorities.  ~E.B. White

These feelings when intertwined with memories, resentments, fears, disappointments and guilt can be like those squirrels’ nest I see; they need editing – and deleting – as surely as the embarrassment of mangy looking flower pots dominating our garden.

To that end, I heard some good old advice recently at a meeting: Don’t believe everything you think.  Or, just because I think something is so doesn’t make it so. A timely reminder not to lean on my own understanding to prop myself up. What I think may be as wobbly a support as those bare branches appear to be! (Proverbs 3:5-12)

Fear can be the stiffest breeze blowing through my branches – Hope is the red marker I am using to edit my thoughts – as well as gratitude.  Looking up, the squirrels’ nests are holding in the current winds blowing through Dallas. Looking around the garden, I have edited the number of pots – just in time for spring planting.

·      There is always a lot to be thankful for, if you take the time to look. For example, I'm sitting here thinking how nice it is that wrinkles don't hurt.  ~Author Unknown