More Light is Worth the Risk

We had four wood panels cut out of our front door, replacing them with glass. We wanted more sunlight in our living room, even as we realized that replacing solid wood with glass might increase the risk of a break-in. But more light is worth it. 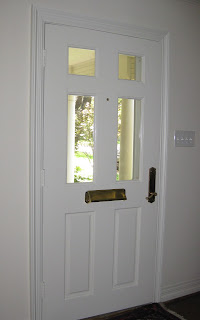 I wish cutting through the wall of political rhetoric this campaign year to get light were as easy – because we need some light if we are going to survive and prosper as a nation, and as individuals.  If the 2012 campaign ads or stump speeches were only what we read – or heard – it looks like our choice the first Tuesday in November will be between a possible felon and a proven socialist – each and both have agendas to destroy the country they seek to govern; both candidates are incompetent and dishonest, according to their opponents’ assessment.

I wonder how either man made it so far.

Since none of the candidates, their surrogates or the media is willing to talk about real stuff, how can we choose good leaders?   And even if we threw every incumbent out of office this year – what about the bureaucrats, local, state and national, who keep the government growing? How will elected officials rein in this run-away horse?

Too many of us throw up our hands and refuse to vote -- Dr. Tony Evans said that Christians can and must vote this year. For whom or how, he did not spell out.  He recommended that voters should spell out what we think the issues are; figure out what the party positions are and what the candidates are saying; line the concerns and contenders with what we know Scripture says about issues and actions – and speech.

That’s the hard part – what does the Bible say about a nation’s deficit spending, national debt, and war; or, its character, prosperity and peace?

Not all Americans agree on a hierarchy of challenges we face – mine may not be yours, dear reader, but perhaps a few will resonate – the economy, welfare and healthcare reform and expansion are huge challenges.  I am listening for a few topics – and I believe Scripture has wisdom here, even for a nation that is not Christian.

·      Putting people to work in jobs that enable us to provide for our families and contribute to our communities and country is unquestionably a top issue.
·      People who won’t work forfeit the right to eat; people who can’t work need our help.
·      So, then, feeding the hungry, and sheltering the poor is what Americans do.
- Is increasing food stamps the best way?
- Is the housing we offer safe, or economical?
·      Also, we must overhaul the health care system – so that we can care for the least of our citizens, with the care we would have for ourselves.

Just as bringing more light through our front door could be risky, it could be risky if the candidates became more transparent -- if both sides laid out their qualifications and ideas, simply, and quit demonizing each other.  But light can be so worth the risk!

Stopping the hurtful, ad hominem or straw man attacks voters hear 24/7 might even give the candidates and their backers the breathing space to think about how they can collaborate with government bureaucracies and other power interests, to govern. Then, we, the voters and citizens of this great nation, might have time to think about what we can do to tackle issues – and quit looking for knights on white horses to save us from ourselves.   And then, maybe the media’s talking heads and pundits would finally get real jobs.

A friend commented on my thoughts:
It seems that the main issue may be that of “character”. The problems noted by the Founding Fathers concerning dangerous character of future “leaders” are all too evident in current and aspiring leaders. Until the leaders cannot be bought we will pay the price.