Just when I think patience and self-control may be resident qualities of my character – life’s little adventures remind me though my fuse is a bit longer, it’s still combustible. Most recently, on another beautiful spring morning, facing no pressure except to get on with my day, a glitch got me – and I got mad.

My computer kept locking up; several times the tiny psychedelic ball whirled interminably, refusing to let me do what needed doing. After what seemed like the fiftieth time, I called the store to make an appointment. Apple’s automated answering machine boasted it could understand sentences – so, feel free to be specific about my problems.  I then was directed to schedule the appointment on their website. 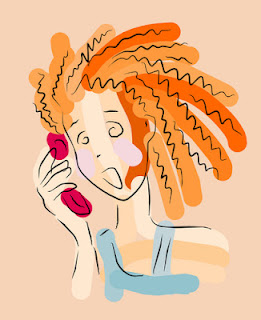 “He-e-l-l—l-o I can’t get to your website; my computer is malfunctioning!”

Why get so angry at an inanimate object?  It’s not like a computer cares that I am going nuts.  And yes, I yelled this into the phone, even as I knew Doug and his computer were nearby. He calmly scheduled an appointment later in the afternoon.

Then, I got on with my morning, and arrived at the Dallas Pregnancy Resource Center to be a Christian volunteer. There I found the receptionist on her knees, fiddling with the office computer. This larger and older inanimate object had also frozen up, and her considerable translation work was held hostage, threatened with erasure if she had to crash the computer – she was praying aloud while pushing buttons.

And when the screen came back on, so did her work – and she praised the Lord, who is always good.

Was there an object lesson here?

Later at the repair place, when the technician ran a diagnostic test or two, she stated the hard drive was OK, and suggested reloading the operating system.  Given my outburst –yelling at a computer – and the object lesson, maybe, I needed my operating system reloaded? (Psalm 139:23-24)

Anger is a risky emotional component in my character.   After all, as some wise soul observed: Anger is one letter short of danger.

What’s dangerous to me threatens others, too.

Will Rogers observed, “People who fly into a rage always make a bad landing.”  Giving into anger can harm more people than me, just as planes that make bad landings can hurt more folks than the pilot. (I Pushed Jesus!)

In my time, I have banged pans, smashed glass, slammed doors and banged cabinet doors shut – and I have yelled, removing all doubt I lost my charm – and some brain cells! It seems indulging frustration is like losing my mind – literally! The Roman poet Horace warned, “Anger is short-lived madness.”   Now science has quantified that an angry outburst destroys brain cells – definitely a diminishing asset at my age!  Therefore, this adage bears repeating:

Before you give someone a piece of your mind, make sure you can get by with what is left.  ~ Author Unknown

I wonder what God’s response might have been, if, like my friend, I had prayed instead of fumed? I know Doug ’s morning would have been more serene.

She that is slow to anger is better than the mighty; and she that ruleth her spirit than she that taketh a city. (Proverbs: 16:32) – Or, in plainer language: It is better to be patient than powerful; it is better to have self-control than to conquer a city. (The New Living Translation)
Posted by bwsmith at 11:47 AM