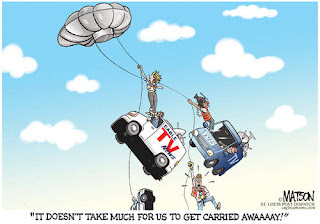 Okay then I will speak sweetly, but in seething tones. If I hear one more group of talking heads – my guys and others, prognosticating, pontificating, and predicating on these caucuses and primaries I am going to . . .  lose my charm!

The pundits love  talking about their point of view but only rarely could discuss more than quoting who said what about whom. The interviewers seemed oblivious to what is going on in the world – and only rarely, imho, pressed those running to explain what they understood about stuff

The press sets traps, and the candidates can’t seem to avoid them; then they both fall into them -- Even the folks I trust have devolved into “gottcha.”

The greater the technology that the press uses to cover the candidates hasn’t made for better presentation of political ideas – or maybe, nobody ever thought any further than their ratings.

Please, candidates focus! You aren’t running for the votes of the press, but to present your assessment of what our country’s problems are, and how we can all solve them.

A great quote by Saul Bellow still sums up my thinking:
Take our politicians:  they're a bunch of yo-yos.  The presidency is now a cross between a popularity contest and a high school debate, with an encyclopedia of clichés the first prize.

I am grateful for the debates – watched every one – for I saw much about the candidates and the newscasters.

My favorite is no longer in the race, Mr. Cain. But I saw Barbara Walters interview him, and I saw and heard him sing to her his favorite hymn. ( See This Link!)