A Mother’s Advice Remembered: Never talk about religion or politics.

But she liked arguing about the candidates, leaders and issues of her times – from the McCarthy hearings to impeachment trial of Mr. Clinton. She was a C-span junkie, and had she lived, she might have been an avid blogger.  She and my father taught me to read newspapers, Time, Life, and THINK, (IBM’s magazine). At dinner we often listed to Edward R Murrow, Patrick Swayze, and Eric Sevareid; later, we transferred our meals to trays, watching David Brinkley and Chet Huntley – and of course Walter Cronkite. So, when she spoke, held forth, she was well armed and passionate!

She rarely discussed religion privately or publicly.
Shortly before she died in 1996, I asked her if things were as bad in her day as they were now – abortions, child murders, violence in marriage, cheating, embezzlements, fraud – Rwanda, Kosovo . . . Watching too much news, I was despairing. Coming through WWII, she’d known about the kinds of horrors that happened in Uganda, Rwanda and Kosovo, and she said that everybody knew somebody who beat their wives or kids – or who had had an abortion – or had stolen company funds. The difference to her was nobody back then was proud of it.
The unspoken restraint in her generation was “Nice people don’t talk about _________.”  Such reticence may have made for more civil discourse, but it forced many soul sores to fester.
My generation felt obliged to let it all hang out – giving rise to the current warning: TMI! TMI! (Too much information!)
Television – network and cable – serves up a cornucopia of stuff – that makes alternative lifestyles as well known as Ozzie & Harriet were to my generation. Nothing is bleeped on cable TV; the Supreme Court is hearing arguments on regular television’s right to provide everything that traffic will allow. (Information on Supreme Court Hearing)
But the networks are pushing the envelope:  On Modern Family, the adorable toddler   will use an expletive, “the bomb,” on a smash hit TV series – the audience will not hear it, but will see her saying it.  (See article)  The child actors on the series and the children who watch it may learn a good lesson on not repeating everything they hear – but they will also learn the power profanity has in getting laughs.
The series has won kudos for its realistic but amusing presentation of family life in 21st century America – primarily for the warm and accepting presentation of   a multiplicity of marriage styles, from traditional to same-sex marriage.  The characters are 3-dimensional, funny, and engaging; the writing on the episodes was excellent. 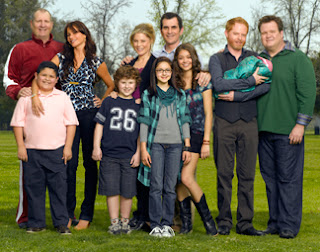 A spoonful of sugar really does make the medicine go down.
When I realized I was laughing about stuff I know breaks God’s heart, and enjoying watching the folks who were caught up in it, I decided to go off the meds – the inoculation was working too well.
Believing today that marriage is between a man and a woman because God said so may be evidence of a phobia. Believing in chastity before and after marriage may be evidence of a delusion. Believing the church can rise above sexual temptations, and make a difference in this culture may also be a stretch of rational thinking.
The topic of what’s fair game for family hour TV series might not be any quieter a dialogue if I brought up a discussion of Modern Family  at the dinner table than the ones my mom used to ignite when she didn’t follow her own advice. But I am glad for the opportunity to write about what I think – and if you read this to the end, dear reader, thank you.
"Elucidate, when one can, rather than advocate." Eric Serareid.

Using Ovens as Dishwashers
*Photo:    BOB D'AMICO/ABC
Posted by bwsmith at 12:29 AM