Amending the Constitution - and Myself 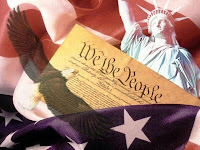 Were you surprised that Congress made a last minute “rescue” of the US economy from the so-called fiscal cliff?

The last minute rescue added to the debt we owe, without changing anyone’s expectations of what the government will do for them. What was rescued was the politicians!   These legislators and the President and Vice-President have jobs and secure pensions and health care most of us do not have.  So, an e-mail forward I received recently made sense.

Whichever side we rooted for, neither side protecting us from the “fiscal cliff” ever had the courage to get real on all the government promises in which we have encouraged Americans to trust.  These legislators struck a deal negotiated behind closed doors after years of failing to legislate. It appears the majority of them struck a deal primarily to save their own skin!

Because neither the politicians nor the media pundits could or would put in plain words the implications of what we owe nationally and personally, we may be forgiven for thinking we now have a bit of breathing space in an oxygen-depleting economy.

I don’t know – but I think the late “rescue” surely means most of us will be paying more to live in the United States of America, under more regulations, local, state and federal.  One explanation of the rescue I heard this morning on HNL television said: Americans will have 2% less in their paychecks.

Maybe if the incoming 113th Congress will finally give us a budget, from which we can discern the government’s goals and objectives, we can hazard an informed guess about our financial future.

Here  are two troubling bits of information that point in a scary direction. Take a deep breath before reading them:

“Come, all you who are thirsty,
come to the waters;
and you who have no money,
come, buy and eat!
Come, buy wine and milk
without money and without cost.
Why spend money on what is not bread,
and your labor on what does not satisfy?
Listen, listen to me, and eat what is good,
and you will delight in the richest of fare.
Give ear and come to me;
listen, that you may live.