Memorial Day 2014: Do Away With Government Tenure 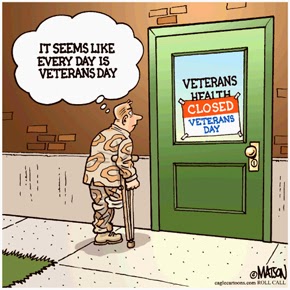 I have the impression Americans are more concerned with our rights to pursue our private happiness, than we are with our shared responsibilities to preserve the rights to life and liberty.

I had the impression that the government and the military would manage the store, so to speak, so that I could spend my life pursuing my goals – and yes, I have read history, and the newspapers.  But knowledge and understanding are not synonymous.

I had the impression that voting other people into and out of their elected offices would be sufficient oil to keep the mechanisms running in our national, state and local governments. I had no understanding of the power of salaried government workers who formed unions.

But I am beginning to see that it is the rare elected official who can wield power and change what he or she promised to change. I have the distinct impression that it is not our elected officials who govern us – it is the bureaucracy we have permitted them to establish and fund.

I have the impression that our local, state and national governments exercise the kinds of power that the aristocracy wielded, with about the same amount of concern for us as the landed “lords” had for their vassals.

Alas, I also have  gained the impression that living on other people’s money is a widespread and accepted notion – from the oldest of us to the youngest. I know like my little checks and perks!

And in the past year, I have the impression that our government’s departments and agencies, have stumbled – badly.  They have done stuff they should not have done, and left undone a bunch of stuff they should have. And I have the impression that finding the underlying cause of messes and holding people accountable may be a bitter political battle.

Thank God, we can [still] have the political battle!

I hope the press will quit its partisan shilling; that our politicians will govern instead of campaign and that they take on the establishment of tenured employees,  a few too many of whom are not embarrassed about their work!

On this Memorial Day, I am grateful for those whose blood and suffering secured the peace and safety in which I have lived.  And I am ashamed and grieved how we are not keeping our promises to the military.

The following quote – inaccurately attributed to  Alexis de Tocqueville -- touched me deeply years ago – building the impression that our moral fiber mattered:

My more fervent hope is that God, who has opened men and women’s minds to see that it is He who gives us our daily bread, and delivers us from evil, will wake up His church in this great nation once again.  Then perhaps we can help America wake up to what is happening to us.

Reform Their Entitlements -- Not Mine!