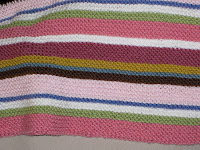 I am making progress on the garter-stitch baby blanket. Will the third try be the charm? Last night I wasn’t so sure.
Having again been caught up in the latest “America Idol” show, I started knitting in the wrong direction, perhaps a hazard of using circular needles.  I don’t speak knitting lingo fluently, so, I can’t accurately diagnose my mistakes. All I know is that on one side, I had five rows, and the other had four.
How did I manage that?
The music selections were a distraction. The contestants were performing hits from the ‘50’s and ‘60’s – My music!  Some adaptations were excellent, others not so much. So, watching the heartbreak of  elimination from the competition  sidetracked me – seeing how some said farewell with class, and others couldn’t contain their wounded pride saddened me – reminding me how well I have handled constructive criticism and “elimination.”
But one trio of hopefuls, young women dressed ala The Supremes made me put down my knitting. All three had experience entertaining, and each one declared, before their performance, their performance background was enough so they had no need to rehearse with the band before their presentation.
Really?
You have professional musicians at your disposal and you think rehearsing with them before an opportunity of a lifetime would be a waste of their time and yours?
Their performance was at best lackluster: one gal, the one whose pride marred her parting comments, was immediately disqualified; another when eliminated later broke down.  I don’t know any of their names – only their glittery pink-sequined shifts and puffy hair – and their pride, which was their downfall. To have come so far, and rebuffed generous and genuine help! (Washington Post)
Maybe that’s when I started knitting in the opposite direction?
Last night’s “American Idol” showed me a thread, however, that shook me up – how often my pride – smugness, self-importance, arrogance and conceit – took me in the wrong direction!  I have too often kept on knitting with it, wrecking good and simple patterns in my life.
I managed to un-knit my blunder, although it took at least three tries. (Long past “American Idol!”) But, I am now ready to cast on the next color.  Those young women can’t redo their unsound decision to rely on their own experience and talent – Hope they learned from their experience as much as they taught.
Ouch!
Posted by bwsmith at 11:17 AM