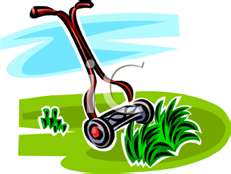 I grew up watching my father cut the lawn, and then saw the duty transferred to my brother. When I spent a decade in apartments and I forgot about the chores that having a lawn will spawn.  That is, until  we bought our first home in Maryland and my husband assumed the mantle of head lawn-man. I timorously became the gardener until poison ivy sideline me for a few years. But that’s another story.   We had no outside help with our yards until after our children went to college.  Those who helped came one by one, spoke English and usually had only a mower.  We knew their last names, and their first. By the time we moved, a crew of yardmen who could swarm over our yard and whip it into shape in short order was not a familiar routine.

But Dallas is different – at least in our part of Dallas. Lawn maintenance crews are a way of life – a blessing, to which I quickly became accustomed.  But I don’t know their names. They speak little English, and often arrive at a time when I am gone.  I don’t usually see them work their magic; I only see the bagged clippings, placed neatly at the curb for the refuse collectors.  They work for a company who schedules their arrival and pays them for their work.

And then I thought about all the other people I don’t know, upon whom I equally dependent. I live my life wholly reliant on the work and good will of others.  Were it not for them, I would not have potable water, fresh food, shelter, safety, transportation, or clothing.

I live because unseen others do.

It’s realizations like this when the reality of my dependent insignificance almost undoes me . . . for a few minutes . . . before my aging ego kicks in, and I think I have written something worth reading!

G. K. Chesterton when he wrote his autobiography near the end of a long and useful life, set himself the task of defining in a single sentence the most important lesson he had learned. He concluded that the critical thing was whether one took things for granted or took them with gratitude. --James Reston  Sketches in the Sand  (from thequotegarden.com)

God bless your day dear reader – with joy and wonder, and a deep sense of gratitude for the life you have before you today – but let’s both speak out!

William Arthur Ward, an American who wrote in the last century, wrote, “Feeling gratitude and not expressing it is like wrapping a present and not giving it.“   Indeed, “Silent gratitude isn't much use to anyone. “(Gladys Browyn Stern)

Let the Word of Christ — the Message — have the run of the house. Give it plenty of room in your lives. Instruct and direct one another using good common sense. And sing, sing your hearts out to God!   Let every detail in your lives — words, actions, whatever — be done in the name of the Master, Jesus, thanking God the Father every step of the way. (Col 3:16-17 from THE MESSAGE.)

Well said, so very well said. Thank you for this encouragement to live a life of gratitude and to live it out loud and to pass this on my children as well. I think so often we live a life of entitlement. But a life a gratitude is def a wiser choice. Thanks!