You can't run away from trouble. There ain't no place that far. ~Uncle Remus

Last night, New Year’s Eve, the news wasn’t great – wars and rumors of war, murderous storms, and looming economic woes swirled together. So, too, as 2010 expired, many of us wrestled with disappointment, age, grief and illness – but for one moment we who watched the television, held our collective breath, feeling a thrill of hope that with the dawn, things will be better. The glittery, lighted ball dropped, setting off the crowd’s building fervency into kisses and hugs and hollering, as the television cameras panned Broadway and 42nd in NYC. And I, too, experienced a rush of emotion that I, too, have a fresh start in a new year that portends better times.

This morning the mercy is I am alive – and that you are too dear readers. But as Uncle Remus observed, “[We] can't run away from trouble. There ain't no place that far.” All the scary stuff that haunted me last year – the fears, doubts, worries, and bad attitudes – showed up as if on cue. So, on New Year’s morning 2011, while I know I can’t hide from troubles, I choose to face “trouble” as Scrooge did when he awoke and realized he had not died; it was still Christmas. 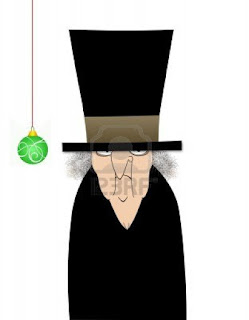 When he awoke that Christmas morning, Scrooge was changed, though his outer man was not. He still had the same aches and pains, the same list of self-made problems and problems beyond his control. But, Scrooge had resolved: "I will honor Christmas in my heart, and try to keep it all the year." So when he realized he had not died, he rejoiced exceedingly and immediately set out to do good, first to those he had treated so dismally – then to the larger community. He acted on what he had learned about his failures.

That’s the mercy of having a new day – even a new year if God permits. I can act on what I have learned – on what God has shown me: He didn’t die and leave me in charge! I am not in control of people, places or things. I can control myself, however, God willing. (Titus 2:12-14) Surely that is cause for rejoicing, exceedingly! My letting go of trying to be a god in other people’s lives may mean they are freed to seek the real God on their own. Or, not.

Will 2011 be a turning point toward personal peace and affluence – when wars cease, the rumors of war squashed, and nature subdued? Probably not. But this good day, January 1 on the 2011 calendar, is a gift, filled with new mercies, new opportunities, and the real help of an unchanging, infinite and personal God – Happy New Day!

“ For I know the plans I have for you," declares the LORD, "plans to prosper you and not to harm you, plans to give you hope and a future . . .”


Image source
Posted by bwsmith at 9:24 AM

Thanks for commenting on my blog. I enjoyed reading your thoughts as well! Happy New Year!