Books were great traveling companions – and just as with many human companions, one conversation was occasionally interrupted by the unexpected arrival of a new friend. Translated: I am still working through a stack! But I finished six biographies: one of an English queen; then, a 1930’s English kitchen maid; next, a White House usher; followed by a baseball legend; a late blooming EMT, and a wife who watched her husband descend into dementia. So, I had some nifty adventures!*

Biography and history – especially those that enable us to get the big picture, while empathizing with the people for whom hard times were personal – are a good use of time for readers, old and young. And, some of the better the more interesting companions were books written for young people.  Searching for books to give our grandchildren, I was introduced to three books that have both refreshed and impressed me: Leaving China: An Artist Paints His World War II Childhood; The Good Fight: How World War II was Won and The Forgotten Man: A New History of the Great Depression, Graphic Edition. A fourth book, Candy Bombers: The Story of Berlin’s Airlift’s “Chocolate Pilot” is a introduction to a seemingly forgotten recent demonstration of American courage, compassion and flying skills. *

Each, I commend, for their simplicity, profundity, and plain old good writing – recounting how people made it through very dark times. 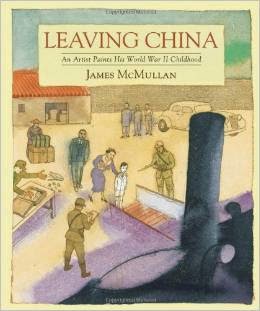 In Leaving China, author James McMullan recalled and illustrated his memories of leaving China because of the incursion of the Japanese in the 1930’s. Through simple, stunning paintings and succinct words the book he looks back through a child’s eyes, and I could see the life changed for a young boy and his family living in China in the 1930’s. It is  a tale simple enough for children to grasp the uncertainty and heartache of a pending war, and poignant for adults who know the history of how World War II unfolded in China and the world. 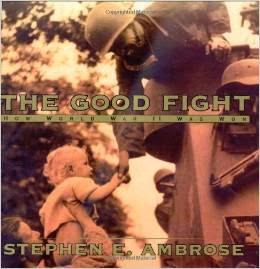 Leaving China makes personal and understandable a part of  the worldwide suffering that The Good Fight: How World War II was Won outlines for younger history buffs.  Stephen Ambrose’s words are few but powerful; his timeline and maps are very useful and the photographs are moving. Some pictures are timeless testimonies to the dreadful cost World War II exacted – such as a child crying after a Japanese bombing raid (p. 11) and two children beholding the French city of St. Lo after its liberation by the Americans. (p.48) Others, to the bravery and suffering of those whose stories we may never know.

Sixty to eighty-five million people died in this cataclysm – depending on how their deaths are reckoned. If every soul could have written their own story, where would we house their books? How many books would we be able to read, especially since Americans are reading fewer books? (A Snapshot of Reading in America --2013) 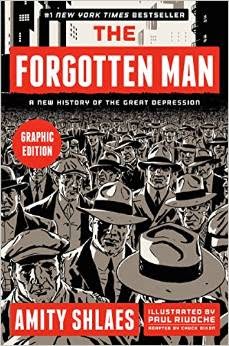 Amity Shlaes’ The Forgotten Man, the graphic edition, is appropriate for teens, and readers who enjoyed Ms Shlaes’ 2007 work by the same name. It is a useful way to get into the causes of the world-wide depression in the 1930’s, that is often cited as a causing the economic conditions that fueled Japan’s militarism, Italy  and Germany’s fascism and the spread of communism; we see sad truths illustrated, through the leaders, and the rich and powerful – and the forgotten man – The man who pays. The man who prays. The man who is never thought of. (p.292)

·      Books are the compasses and telescopes and sextants and charts which other men have prepared to help us navigate the dangerous seas of human life. ~Jesse Lee Bennet, educator and author

(*Doug recommends the following for grown-ups Daring Young Men: The Heroism and Triumph of The Berlin Airlift-June 1948-May 1949, by Richard Reeves)

·      Minding the Manor: The Memoir of a 1930s English Kitchen Maid by Mollie Moran -- Recalling her encounters with the upper classes and royalty, and those who served them, Mollie Moran shows us the demise of the class system that so intrigues “Downton Abbey” addicts, and the rise of the British resolve that endured five more years of war.

·      Upstairs at the White House: My Life with the First Ladies by J. B. West, Mary Lynn Kotz (Mrs. Roosevelt through Mrs. Nixon)

·      I Never Had It Made: An Autobiography of Jackie Robinson by Alfred Duckett, Jackie Robinson – fills out the details of a brave man’s life, his success and deep sorrows.

·      We Keep Our Potato Chips in the Refrigerator: A Memoir of an Alzheimer's Victim [NOOK Book] by Patricia Cox