On the Porch with Solomon 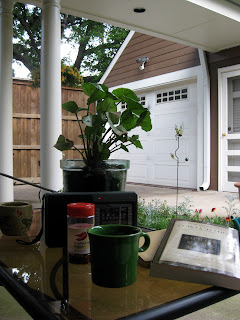 Quiet time on the back porch was almost too chilly – but a cup of coffee warmed the blood and kept it moving to old bare toes.  We have had so many lovely days! I know that this time in July and August sitting outside with java and classical music won’t be so appealing.  Grateful,  I read a bit from a John Piper’s book, Bloodlines: Race, Cross, and the Christian. And I filled again with sadness that times are so troubling.

My campground, as I said, is Ecclesiastes, a book I read through in two mornings. And I am reading from the Daily Walk’s Living Bible translation, which includes some handy goads and pithy commentary.  The editors ask me to answer:

Who wrote Ecclesiastes and when is debatable according to Wikipedia. I will refer to Solomon as its author, knowing its insights may not have been recorded in the 9th century BC, but as late as 200 BC – a time while Israel longed for a word from God, as she sunk under foreign domination.

Solomon had wealth and wisdom –  he also had health and strength. He had perspective – and was able to see a bigger picture than many men. But he had no peace. In his opinion,

Coffee and classical music on a chilly May morning in Texas ain’t half-bad.  And having  even 15 minutes to think, reflect, and pray is a luxury many women don’t have – it's more than all right. Maybe just reading about the issues Dr. Piper raises will weave a thread of understanding, conscience and courage in me to stand against mistrust, hatred and separation among Americans if only for today.

I love my country – I grieve for our failures and I ask God to give His church here a fresh start, making us comforting, kind and transparent in uncertain times.

Note: the bottle of red pepper flakes in the photo is my current weapon against the burrowing squirrels who forget where they have hidden last year's acorns.
Posted by bwsmith at 12:10 AM

Email ThisBlogThis!Share to TwitterShare to FacebookShare to Pinterest
Labels: racism