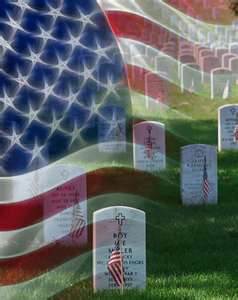 For love of country they accepted death ...  ~James A. Garfield

I first knew this day as a marker – the beginning of summer. I did not understand the debt our nation owed to its soldiers for many decades. Until the cost of war became personal, I never knew how inadequate my power was to repay those who fought for me and mine.

While I grew up steeped in an awareness of the Civil War –  its cost was never personal until Ken Burns chronicled the cost through photographs and letters in his series, “The Civil War.” Battles like Antietam – the starting point of our Memorial Day celebrations, racked up unimaginable costs to the soldiers and citizens.

The first time war became personal was Vietnam – the television news and journalists, most who opposed the war, shaped my opinions.  I never counted the cost to the soldiers.  That changed when I saw pictures of Vietnam vets so callously treated by the citizens they served.  One Memorial Day I watched the movie  “The Hanoi Hilton.”  I saw how much so few endured because they served.

A documentary in the early 1970’s The World at War, connected many facts I knew about WWII while showing how so many soldiers did so much – suffered so much, and how civilians suffered. So, too, moving to Annapolis refined my appreciation of a deepening debt to men and women who served – the USNA is a study in contrasts: the nobility of those who serve, and the horrors of the battles into which they go.

Now, I understand this national holiday as a different kind of marker – this is what freedom costs. War is hell. (William Tecumseh Sherman) And real people really suffer.

When we had a son and a daughter, I saw them in every soldier, sailor, or airman I encountered. Having grandchildren, the meaning of  “blood and treasure” deepens my gratitude to those who step up and serve, and my sorrow that we haven’t yet stopped fighting and killing.

Yesterday the text for the sermon was from Ecclesiastes – my camping ground this summer. It was a reminder to pray for the leaders whose policies and politics lead to, or away from, wars that grind up the lives of soldiers who are precious to so many.

And a goad to put my money where my mouth is – and give!
Posted by bwsmith at 7:52 AM