I love several cable TV challenges, like Food Network Star, which I’ve followed for three years – and tonight’s finale culminated not only with  the contestant winning who Doug wanted but with the challenge to sign up for next year’s challenge. 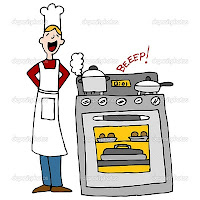 Wow . . . me on the Food Network Challenge . . . I don’t think so.
I have plenty of experience; fifty-five years give or take a few, but no training. I started cooking when I was in the fourth grade, and my mom had taken a part-time job. I thought I’d surprise her with what I imagined would be spaghetti. It wasn’t. Later I learned Italian tomato sauce doesn’t have eggs and carrots.
Undaunted I knew I needed a recipe so I opened my mother’s dog-eared cookbook and found a good one. At least I could read what all the ingredients were. However, I later found out even experienced bakers shy away from hot-milk sponge cakes -- the one I had chosen.  Mine never materialized because I remembered I wasn’t allowed to light the pilot light in our gas oven.
Within months my mom quit that job. 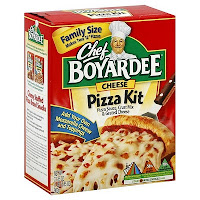 After my initial foray into cooking, I was invited to watch the cooking instead of do the cooking. I started cooking for real when I was in college – and I rarely referred to a recipe book. Usually I just followed the directions on the back of Chef Boyardee pizza box, and improvised.  Improvisation well describes my culinary technique for the next several years, as does imitation.  I cooked by trying to remember what I'd seen others do. That technique made for some interesting meals.
When I got married, though, I was given cookbooks. My mom gave me The Maryland Way cookbook and Southern Living’s Entertaining (1972), which offered lots of practical tips and pictures.  Then I started buying cookbooks – enough to fill several bookshelves. Most are still in storage in Maryland. Now I read Cooks Illustrated and Real Simple recipes. And Recipe.com is a godsend!
I like following a recipe, something somebody else has tested, to get me started, or my resourceful impulses might sway me to add carrots and milk again. The ones I like best have lots of pictures of meals with a minimal number of  ingredients.  I developed favorites that I almost can make blindfolded. (Every once in a while, alas, they’ve tasted that way, too.) When I have a success, however, it’s sometimes hard to remember what I did put in.
None of this would make compelling, instructive or entertaining TV.
Some of my disasters might be funny. At least now  I can laugh about them.  Like the first evening we entertained Doug’s dad. I decided we would have leg of lamb. The recipe included adding a few cloves of garlic stuffed under the skin before roasting.  If three or four cloves were good, why not put the whole flower in, I reasoned? It smelled divine while cooking; the response was remarkably similar to the one I got when I proudly served my first spaghetti dinner.  My father –in-law insisted for months after that we always go out to dinner until I redeemed myself and offered a decent meal.
My husband and kids were always good sports if I branched out. Even when I offered my son a slice of chocolate cake from the I Hate to Cook cookbook, he didn’t make a big deal when he took a bite. It was an easy recipe made with fun ingredients like cocoa, soda, vinegar flour and sugar.  I forgot the sugar.  Not a good thing. (Peg Bracken) However, neither of the kids ever pressured me to make Christmas cookies after that
When we arrived in Dallas several years ago, I cooked routinely for Doug’s mom, since the ladies who were looking after her did not cook.  My mother-in-law was used to eating her meals at tables set properly.  No condiment bottles ever strayed on to her table!  It was more of a challenge to remember what I had learned in 7th grade Home-Ec about linens and liners than any of my go-to recipes!
One thing about remembering all my cooking “experience” I know I couldn’t hack what these kids pulled off, even the ones who were the first off the show!  The Food Network is doing a great job inspiring all these cooks to be professionals – especially in a town like Dallas where there are nifty restaurants – with carryout’s on just about every corner.  I am inspired to eat their food.
Posted by bwsmith at 12:43 AM