Who knew that so much mustard could be a tasty ingredient in a barbecue sauce? 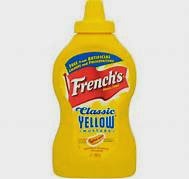 I spent many summers in South Carolina as a child, and then visiting when my folks lived in my father’s hometown for a decade. However, of all the distinctly southern traditions, they passed on to me, barbecue was not one of them. For them, and me, it was an acquired taste – we never ate “barbecue” in Baltimore. (Unless you call grilling hamburgers and hot-dogs outside, “barbecue.”)

Not until I married a Texan, and came to his hometown did I realize how deprived I had been!  Maybe it’s the smoky flavor that addicts a soul, maybe it’s the fat content – or maybe it’s buttered, toasted rolls soaking up all that sauce, but I can’t go long without bit o’ barbecue.

So, when our son-in-law traveled to Greenville, SC, (a stone’s throw from my parents’ former dwelling) and knowing my keenness for all things barbecue, he thought I surely must have sampled South Carolina mustard sauce barbecue.

Never heard of it!

My parents learned to eat barbecue when they lived in South Carolina – buying it from the restaurants. They even learned the differences between North and South Carolinian barbecue – but never tried cooking it themselves, assuming barbecue was too complex a culinary endeavor. (South Carolina's BBQ history) Alas, I too came to believe that making a passable barbecue was beyond me – even with all the sauces and spices now at my disposal.

But a few good recipes, from friends, a slow cooker, a bit of exotic salt, French’s mustard and liquid smoke have liberated me from the chains of barbecue ineptitude – and even impressed my Texas hubby that South Carolina’s barbecue has some merit.  All you need is a bit of time:

I started with Slow Cooker Pig’s recipe; I let it cool, separated the meat from the cooking broth, and skimmed off the fat.
I doctored Mustard Sauce BBQ, adding a tablespoon or so of tomato paste, and a little bit of liquid smoke. I added the de-fatted broth (about 3/4 cup)

To all this deliciousness, I had to add some Maryland flavor. (NO, I did not add Old Bay . . .) So, I made my daughter’s recipe for coleslaw – which came from her husband’s family:  a package of coleslaw, mild banana peppers, cherry tomatoes, green onions, a bit of mayo – and let it marinate in the refridge.
Now, I am learning the distinctions among Texas barbecue are many and varied. But I know with the slow cooker – I need not fear. A little of this, a bit of that . . . who knows?  Not until we started driving between Texas and Maryland did I come to understand how many barbecue styles there are – and that overlooks the barbecue havens (or is that heavens) to our west!