Ms. Pelosi was right when she said we’d find out what’s in it when Congress passes the Affordable Care Act. I still don’t know; 2000+ pages is a lot to read.  But what I do know, just by listening to the talking heads, something fundamental has changed since March 23, 2010.

The President signed the law Congress passed requiring us to do something they exempted themselves from doing. And they put the I.R.S. in charge to see we all buy what Congress is selling.  Nobody, though, realized that the NSA could read our emails and listen to what we thought about it all.

Someone who has read the new law, Denny Weinberg, described it as an iceberg, of which we have just seen the tip:

. . . It is a complex array of vaguely related mechanisms, assumptions about motivations and consequences of both harsh and subtle incentives and penalties. Many details are dependent on unknown decisions and solutions that would be determined in future months and years. Every part of the act is dependent upon the perfectly performing assumptions of every other part of the act. There has likely never been a law with so many interdependencies and unproven dynamics . . . The Future of American Medical Care

Icebergs, according to recent documentary, begin with one snowflake. (PBS: The Iceberg that Sank the Titanic) In time, an accumulation of flakes grows into an ice mountain whose hidden depths can destroy ships that sail too close. Pride, inexperience and poor planning also helped sink a ship that was thought to be unsinkable.  (Why the Titanic Sank) 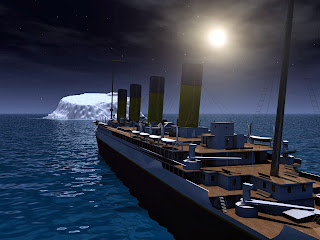 I believe we are sailing now through dark waters, and coming close to a new giant “program,” whose underpinnings few of us can clearly apprehend. And I am afraid we can’t just change ships, hoping for smoother sailing.

Trying to “fix” the problems the Affordable Care Act has generated seems like rearranging the deck chairs on the Titanic – I believe health insurance, as we have known it, has collided with economic, social and legal realities that are powerful as that iceberg’s deep web that gouged the side of the Titanic. I feel like a survivor of such a shipwreck may have felt waiting for rescue – waiting, hoping, and trusting help is on the way for each of us.

The rescue boats, however, may not be the kind we had anticipated.  Government-mandated life-boats may have unexpected rules and practices.

It’s disheartening though to listen to the explanations of how and why the roll-out of website has only enrolled 100,000 people, and the Affordable Care Act  has taken away the coverage of 5 million Americans.  It’s scary . . . not having the wherewithal to pay for healthcare always has been.

An Answer to Fear: Idol Worship -Me?
Posted by bwsmith at 7:38 PM