The Third Sunday in Advent 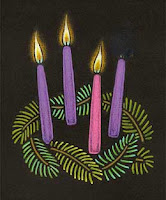 This morning dawned gray – as if the skies here are filled with the sorrow overflowing from Connecticut.

From what we heard yesterday, from those whose jobs are to rush into situations from which we would flee, we know what they saw was horrifying, more from what they did not say, then what they did.  English has no words that can describe what happened – the word that still comes forth is evil. And the measured description of its power in that elementary school that Friday morning pulls us under as waves of mourning crash over us.

One reporter, Geraldo, chose his words deliberately and described what he had learned about the slaughter as a “mini- Holocaust,” another marker in human history for which we have few words.

Gov. Mike Huckabee said aloud what worries many Americans – Where Was God?
Gov. Huckabee’s faith informs him, and a pastor who spoke with him, Max Lucado, that God permits man to choose – even evil – that is the bitter fruit of Adam’s taking that that was forbidden and eating. The Bible teaches our choices may harm not only ourselves, but others.

Why did God let this happen?

I don’t know the answer.

In China, on the same day a man burst into a class of little children. (23 Injured in Knife Attack) Mercifully, none died.

Why did God let this happen?

I don’t know the answer.

I know what the Bible teaches – that God permits us to choose how we will live, even as He gave His Son to die for all the consequences of my choices.  The choice of whom or what to serve is daily before me; God is pleading: Choose life! (Deuteronomy 30:19)

Pastor Lucado concluded his conversation with Gov. Huckabee with an appeal to anyone who approve, or would choose a course of action like the one the shooter chose, don't.  Ask for help.

My hope is that those who ask will find help in Christ and that the Christian community will love and support them and their families.

Pastor John Dickinson observes that the power of evangelism is declining in America – not a reality to be lamented, if we would expand our reach the world for Christ:

. . . I believe the cultural backlash against evangelical Christianity has less to do with our views — many observant Muslims and Jews, for example, also view homosexual sex as wrong, while Catholics have been at the vanguard of the movement to protect the lives of the unborn — and more to do with our posture. The Scripture calls us “aliens and exiles” (1 Peter 2:11), but American evangelicals have not acted with the humility and homesickness of aliens . . .

. . . Simple faith in Christ’s sacrifice will march on, unchallenged by empires and eras. As the English writer G. K. Chesterton put it, “Christianity has died many times and risen again; for it had a God who knew the way out of the grave.” (NYT: Decline of Evangelism)

God we need that way out!