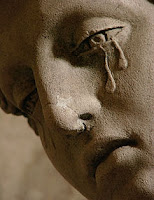 A nightmare, by its definition, is an unpleasant dream that can cause a strong negative emotional response from the mind, typically fear or horror, but also despair, anxiety  and great  sadness.   When I have them, I often awake uncertain of the details, but certain of the emotions the dream evoked. It may take me awhile to get my bearings.

Gunmen in Nigeria and suicide bombers in Afghanistan, Pakistan and Iraq kill large groups of people, including women and children, creating nightmares for all the families and friends touched by the senselessness.  But, though they should, these acts do not haunt me as the act at a school in Connecticut on December 14, 2013.

Yesterday, a nightmare became a waking reality and I can’t seem to shake off the horrors attending them; I am struggling to get my bearings. So is our country – even the world, as we process the news one human slaughtered twenty-eight other human beings, twenty of whom were children, after apparently murdering his mother.  Yesterday, stirred up unanimity of reactions, expressed best by Gov. Dannel P. Malloy of Connecticut: “Evil visited this community today.”

How we contend with evil – how we survive its onslaught – is answered in the Bible.  The prayers and counsel of many of its colorful and courageous characters wake me up. Jehoshaphat and Jahaziel, a king of Judah and a Levite, had a conversation worth repeating two and a half millennium later. (2 Chronicles 20)

Facing an invading army who meant to destroy Judah, Jehoshaphat cried out: God, act – we have no power to face this army – we do not know what to do, but our eyes are on you. And Jahaziel told the king how to fight; first by remembering the battle is the Lord’s.

Am I saying Scripture says do nothing?

The church may offer ideas on how to change laws to better guard our citizens. The reality is no law can restrain a roaring lion  – even the best laws can’t conquer evil, or people determined to destroy others. (1 Peter 5:8) Whatever our nation does in the coming weeks and months, I pray the church will call for fasting and mourning.  (2 Chronicles 7:14)

Our government is not a theocracy – God is not the head of the US of A. But He is the head of the church, and it is first within our boundaries to renounce and repent of the stuff that is sapping our strength.  We need a clean heart – and maybe we can see how serious the battles are we face with God’s enemy. (Psalm 51)  May God Himself wake us up! (Revelation 3:3) With a clean heart, then, maybe we can be useful, and rightly mourn with those who mourn, and in time,  maybe really bind up the wounds of the broken hearted.

Sing with me a  Hymn of Meditation:
I Wonder as I Wander
Sadness Image
Posted by bwsmith at 11:26 AM