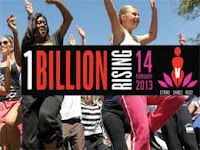 We, too, are invited to rise up from our jobs, duties, tasks, and dance, demanding an end to the terrible violence perpetrated against women and girls.  Apparently the United Nations, even, will suspend their deliberations, depart the building and go out into the streets of New York City and dance to draw attention to these horrific acts.  If dancing were all it took for us finally to open our eyes and see the broken and battered bodies, then shame on us for not recognizing this sooner. Go Anne!

In itself, permitting these acts to go on attests that we have not climbed too far from the “soup” out of which some hypothesize humans slithered.

Nevertheless, many folks are doing what they can to stop it. (International Justice Ministry) It’s never enough for the ones who have been brutalized today, though.

Violence against women is an evil epidemic, also destroying the humanity of the men who do such things.  Ms. Hathaway’s portrayal of a young woman brutalized by life and other men and women illuminated the anguish long borne by millions upon millions of women.  The numbers of humans harmed by our ignoring the atrocities is overwhelming!

But I don’t get the connection that dance parties will succeed in raising awareness and inciting action against personal perpetrators of domestic violence. Will the people who brutalize others now restrain themselves because women dance? Or, will many of us enjoy the dance parties, then congratulate ourselves for caring about hard issues without actually having to stop a beating?

Oh. Would this be a good segway into the topic of sex-selection abortions? (Wiki link)


background on one billion rising
Posted by bwsmith at 1:00 AM