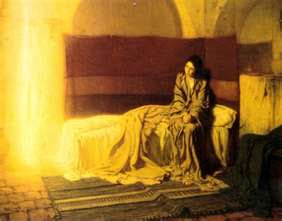 What did Mary understand after Gabriel spoke?

She understood that God would bring forth a living human being from a virgin womb – as He had said to Isaiah seven centuries earlier – and as the angel Gabriel declared to her.

What did Mary do? She believed what God said. ( Luke 1:38) Elizabeth, speaking for God declared Mary was blessed because of what she did – she believed God. ( Luke 1:40-45) Mary examined the fulfilled promises of God. (Luke 1:46-55) And she believed what seemed impossible but what was promised – she, a virgin, would bring forth a son.

Yet, my religious convictions – which I call my faith – rest squarely on this promise, that God would bring forth a child whose conception was unique. (Isaiah 7:14; John 1:13) I repeated this conviction for decades before I confessed it:


“We believe in one God the Father Almighty, Maker of heaven and earth, and of all things visible and invisible.

“And in one Lord Jesus Christ, the only-begotten Son of God, begotten of the Father before all worlds, God of God, Light of Light, Very God of Very God, begotten, not made, being of one substance with the Father by whom all things were made; who for us men, and for our salvation, came down from heaven, and was incarnate by the Holy Spirit of the Virgin Mary, and was made man, . . .” (The Nicene Creed)


His conception was as unique as His mission, a mission defined by His name, Jesus – because he will save his people from their sins; Immanuel – God with us. (Matt 1:20-23) And, before a unique moment in time, I recited what I did not understand:


“. . . and was made man, and was crucified also for us under Pontius Pilate. He suffered and was buried, and the third day he rose again according to the Scriptures, and ascended into heaven, and sitteth on the right hand of the Father. And he shall come again with glory to judge both the quick and the dead, whose kingdom shall have no end . . . ” (The Nicene Creed)


Once a year – but every day – I remember that God, who so loved the world, gave His Son,


“. . . Who, being in very nature God, did not consider equality with God something to be grasped, but made himself nothing, taking the very nature of a servant, being made in human likeness. And being found in appearance as a man, he humbled himself and became obedient to death- even death on a cross!” (Phillipians 2:5-8)


The longer I walk with Christ, the less I understand – and the more precious the examples of women like Mary become to me:


Believe God,
Remember His faithfulness when what He says sounds inconceivable; when what He asks looks impossible.


Mary exemplified what I can do when nothing makes sense – she believed in the One whom God sent. (John 6:29) And, still a virgin, nine months later she and her betrothed, Joseph, beheld her Son; a baby, named by Joseph, Jesus. ( Matthew 1:20-2:1)

“And I believe one holy catholic and apostolic Church. I acknowledge one baptism for the remission of sins; and I look for the resurrection of the dead, and the life of the world to come. Amen.” (The Nicene Creed)


May God fill our hearts with the Hope that does not disappoint. Merry Christmas!

The painting is "The Annunciation" by Henry Ossawa Tanner  , an artist worth knowing!
Posted by bwsmith at 10:32 AM